Strong, flexible hips, play a defining role in your upper and lower body movement, so taking the time to give this part of your body some attention in your fitness routine is well worth it.

The psoas march is a fantastic, beginner-friendly, hip flexor strengthening exercise and can be performed as a bodyweight movement or with the addition of resistance loop bands for added difficulty.

In this exercise guide, we outline everything you need to know about the psoas march, including how to do it properly, muscles worked, benefits and things to consider.

We also discuss the difference between performing a standing psoas march and a supine psoas march, so you can decide which variation best suits your requirements. 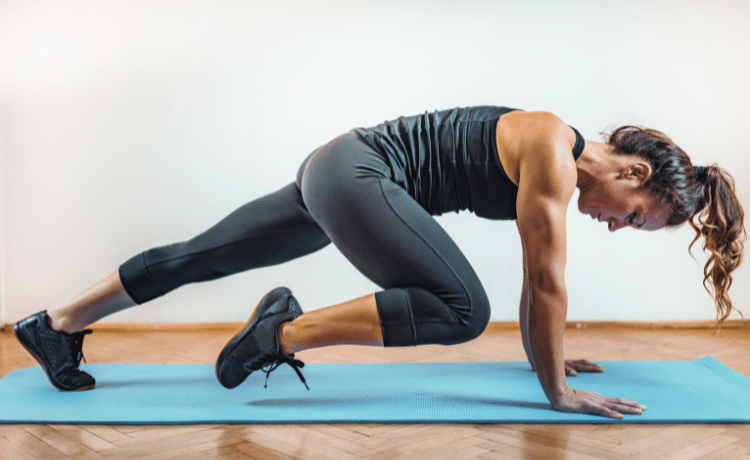 A FITTER, STRONGER YOU

A simple science-based workout plan that is proven to help build muscle, burn calories and lose weight. Suitable for all levels.

What is the Psoas March Exercise?

The psoas march exercise is a hip strengthening exercise that activates the psoas muscle, abdominals and glutes.

The psoas muscle plays a vital role in connecting the upper and lower body, as well as the front and back of the body. Ultimately, it has a very influential impact on hip flexion and the ability to move freely from the pelvis.

A feeling of “tight” hips can often be related to weak or tight psoas muscles.

We recently published a guide on the best hip mobility exercises (with a printable PDF), which provides 10 other exercises you can do alongside psoas marches to really bulletproof your hips.

How to Perform the Psoas March

To do the Classic Standing Psoas March:

To do the Supine Psoas March:

Add a Resistance Band for Progression

For both psoas march variations (supine and standing), you can use a resistance or therapy band to increase the difficulty. The band will create more resistance and require more activation from your muscles as you lift your knees up. A “loop band” is likely going to be the best type of resistance band to use for psoas marches.

The psoas march will primarily work the hip flexor muscles. These include the psoas major, iliacus and tensor fasciae latae.

The exercise also works the anterior thigh muscles, which include the rectus femoris, the pectineus and the sartorius.

The abdominals and glutes will also be engaged during the movement.

Ultimately, the psoas march is a great way to strengthen the hip flexors, including the psoas major, iliacus and tensor fasciae latae. Stronger hip flexors mean you can generate more power and strength from this region, which helps in all sorts of movements and activities.

Any sort of hinging movement, as well as movements that require you to lift your legs up forcefully, such as sprinting, really benefit from strong and flexible hips.

When performing the psoas march, your body will constantly be fighting against slight wobbling and instability caused by having one leg extended at 90° whilst trying to keep the lower back straight.

This helps improve core strength and stability, ensuring your core is strong enough to create stability whilst your legs move (a skill that is really important for functional movement).

This is why you might want to start without a loop band, because even the bodyweight version can be tricky to maintain proper technique throughout.

With age, many people find hip movements difficult to perform or even painful. This exercise aims to tackle these issues head-on by building strength in the key muscles involved in enabling straight leg hip movements. “Tight” hips are often simply a result of weak muscles, such as weak psoas muscles, so an exercise like psoas marches can be transformative in helping to unlock hip movements.

May Reduce Lower Back Pain

Psoas marches help to build lumbopelvic control and stability in the pelvic region, which can reduce lower back pain caused by weak or tight hips.

Powerful hip flexor muscles let you flex or lift your thighs towards your body. You also need them when bending your body down to the ground. When these muscles are weak or tight, you may experience low back pain or tightness in the front of your hip. This is why it is essential to keep the hip flexors strong and active.

An exercise like psoas marches helps to “wake up” these muscles and ensure they are getting adequately activated.

There are two variations of the exercise so it’s nice to know that you can strengthen the hip flexor muscles in different ways and still focus on the key techniques involved in the psoas march. With the use of the resistance band, it’s an effective way to build difficulty into the exercise whether you are alone at home or in a group workout.

We find it to be a very effect warm-up for any workout that involves running, sprinting or jumping, as well as hinging exercises, such as a Romanian Deadlift.

All of us need our hip flexor muscles to work well when we do everyday activities such as walking, climbing the stairs, running, squatting, sitting up in bed, and so many other daily movements… and weakness or tightness in the hips will subsequently make such activities harder, impacting mobility and activity levels.

Taking the time to strengthening and stretch out the hips frequently, will help keep them functioning as they were designed to.

Like any stretch or exercise, technique is everything. Take things nice and slow, ensuring you are focusing on keeping your core braced and stable throughout. You don’t need to push or lift your leg too powerfully… instead keep it nice and controlled at all times.

The central skill of this exercise is the ability to drive the knee up (variation 1) or knee down (variation 2) while maintaining strength and stability in the hips and core.

When the resistance or range of movement is too much, you could notice your back rounding or rotating. If this happens, consider using a lighter resistance band or reducing the range of movement for the knee drive. It will help to slow down the motion and focus on contracting the hip flexor muscles.

When performing the psoas march with a resistance band, engaging the core muscles helps keep your lower back strong, so be aware of your technique throughout to control the hip flexor muscles.

The psoas march is generally a safe and enjoyable exercise for most fitness levels. One with great benefit for improving hip movement.

To do this, you should always focus on proper technique and form in performing the exercise. If you feel any pain during the movement, you should stop the exercise and speak to a Physical Therapist.

Fire Hydrant Exercise – How to Perform and Benefits

What Are Plié Squats?